Terry was a veteran of Dragonhollow, a Priest of Eris, and co-founder and mayor of Norwich. He was known for the bad luck and zany antics that became the basis for Terry Tales.

As a citizen of the Second Era, he was consecrated by Eris to serve as a member of her loyalist clergy, but his brief tenure as priest ended in blasphemy after the failure of his coup. Though Terry maintained his innocence and blamed the nefarious black magic of his brother for the event, he ultimately accepted responsibility and the consequences that followed.

He served as a scribe within the Brotherhood of Steel and fought in their Peace War. By the Third Era he had risen in their ranks to become acting elder of the Dragonhollow chapter and secured an alliance with the Dragonslayers during the deadly Northham Wars all the while subtly working to undermine their influence in the Northlands.

During the Fourth Era he raised castles in Summergate and Everfroze that were destroyed before they could be completed. Terry took on a more active role within society in the Fifth Era, establishing a Community Tower in Freetown, raiding Hardhome, joining Ouroboros and founding Norwich with Macca in the new expanse of Outer Pandora as well as raising Darklight Tower.

Afflicted for most of his life with an unusual disorder that rendered him unable to perceive time as quickly as those around him, he suffered greatly in Dragonhollow's unforgiving wilderness. However, he discovered a cure in the Fifth Era and made up for lost time by defeating an ender dragon alongside FlyingPokemon, earning three consecutive top five finishes in the Pandora Survivor competition, and finally conquering the Dragon Temple.

In the Sixth Era Terry lived in the Pumpkin Patch as a member of the Pumpkin Brigade and designed the Magma Maze, a new maze that debuted in Sanctuary during the Seventh Era.

Grave at the Summergate Sematary

Building his wall in Freetown

Damn Terry Back at it again

At his estate in Freetown

In Rider's Rest near a Clan Gate

Pain in the neck 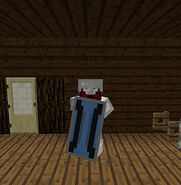 Starting work on the Community Tower

On the prowl near Slimedale

Just a day in the life

Fishing at Ky's place in Hardship

In his Pumpkin Patch

Armed and ready outside the Pumpkin Patch 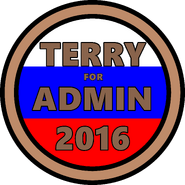 Campaign Button for his Priesthood bid

In Sanctuary
Add a photo to this gallery
Retrieved from "https://dragonhollow.fandom.com/wiki/Terry?oldid=10667"
Community content is available under CC-BY-SA unless otherwise noted.