View source
watch 01:36
We're Getting Mutants in the MCU - The Loop
Do you like this video?
Play Sound

Sly Cat was a mischievous ocelot who lived in Sanctuary.

He was an information broker who profited from the sale of books with misleading or outright false claims, with all sales being final and no refunds offered. He had heterochromia; one eye was green and the other a greenish-blue.

During the Fifth Era he operated out of a building near the skydock at Blackbourne Harbour where he sold The Underground for a gold nugget which purported to provide hints on how to reach the Black Market. However, the information was deceptive, leading residents to a dead end.

He later moved to Tox's Cabin on a floating island which could only be reached from a secret teleport in Hammerlea. Interestingly, a note on the wall read "he lies!!"

Sly Cat played a role in the quest to find Tortuga by selling Pawsitively Purrsuasive, a collection of hints for residents of the Seventh Era. Though some of them were lies meant to get the reader killed, the book's brief mention of Tortuga actually contained useful information for those led astray by the quest's many red herrings.

According to her diary, during the hunt for Tortuga Cassandra was told to find a "shadow broker" who lived in a "tiny cabin on a floating isle in Sanctuary", but overlooked Sly Cat as just a "lazy ocelot" and never thought to talk to him. 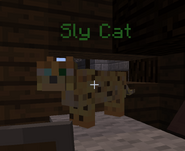 Jinx has a chat with Sly Cat

On the bed in Tox's Cabin

The following is out-of-universe information about the real world Dragonhollow.

Sly Cat was created by Acey using the Shopkeepers plugin. He was given his name by Retro. Tox's suggestion of "Snitch" was rejected.

It's entirely possible that Acey never intended for him or his book to be deceiving. She implemented both before the Black Market token underground was completed, then took a leave of absence, prompting HyperSilence to develop and implement his own ideas without regard to what she may have planned.

However, Tox felt the idea of Sly Cat being an untrustworthy source of dubious information was in keeping with Acey's image as the "goddess of discord". A year later while working on the Finding Tortuga quest with Retro, he brought back Sly Cat to serve a small but potentially useful role in locating Tortuga.

Ironically, Sly Cat's original claims in his book The Underground that referenced "the guy out back with the boat" being the way to reach the Token Underground ended up coming true when Retro and Tox had the boatman use the same Rainbow Nebulas airship to bring players to Tortgua. Tox referenced this irony when writing Pawsitively Purrsuasive, having Sly Cat crack a joke about it.

Community content is available under CC-BY-SA unless otherwise noted.
Advertisement