Pi was an artist and veteran of Dragonhollow.

Best known for his offbeat humor, he often played practical jokes on his fellow residents and did his best to keep spirits high. He was the mayor of Pi Hole and forged several lasting friendships, though his fondness for Elite ended turbulently at the height of the Northham Wars.

Pi immigrated by airship on 2E:39 and became a citizen of the Swamplands.

He made his home on an isolated island roughly halfway between Swampwater and Nutville, where he lived as a simple shepherd selling wool of all colors harvested from his sheep farm.

Though he never won an archery competition at the Archery Range, he was a skilled bowman and Acey granted him the title of The Archer.

Pi created a bank where residents could rent a vault to store important items or treasure.

At one point, he surrounded the entire End Hub with unbreakable beds, for a time turning the End into an impassible minefield. Reaction was mixed, with some appreciating his sense of humor and others criticizing his immaturity and demanding he remove the beds.

When he went on a pilgrimage outside Dragonhollow, Smitten acquired the property and it became a primary source of wool for Nutville.

Pi was the main character in Cupid's Story and was mentioned in the Diary of AJ.

After the wide open expanse of Woodlands was discovered, Pi decided a fresh start was in order and he established a small home deep in its forests. As more citizens obtained passports and migrated to the unspoiled land, he founded Pi Hole and invited tradesmen and peaceful folk to join him.

Pi Hole grew slowly to become a quiet and humble farming village. Pi took one of the new residents under his wing and began training him in the ways of the world, marking the beginning of his close friendship with Elite.

The village's small size and peaceful atmosphere made it a target for bandits and scofflaws. A series of raids diminished what little wealth they had. On 2E:123, Panda betrayed his own community and stole the entirety of its remaining valuables, leaving nothing left.

Pi did not take the theft well. He was further stressed by the fact that Elite refused to denounce Panda's actions in defending them as legitimate and well within the spirit of Dragonhollow's "only the strong survive" principles. As a result, Pi announced he was leaving forever and the town was abandoned.

On the last day of the Second Era, Pi returned amid great fanfare and a celebratory party arranged by Elite.

He took an active role in the community, attending official events and participating in discussions. He also dabbled in some amateur photography and authored several books, including his treatise on leadership The Leader's Etiquette.

Elite helped negotiate a truce between Pi and Panda. They both decided to let bygones be bygones and became lasting buddies.

He was forcibly exiled for breaking one of the sacred rules of Eris when he accidentally advertised a world far beyond Dragonhollow. After being sponsored by Elite and placed on probation, Acey rescinded his banishment and he was permitted to come back.

Pi avoided much of the bloodshed and anguish brought by the Northham Wars through his ties with Spud, sparing him the wrath of the Dragonslayers. That placed strain on his friendship with Elite, who was a sworn enemy of Spud and his faction.

Nevertheless, he agreed to set up a permanent residence in Haven, a public village outside the walls of Sanctuary under the protection of the Justice League. He came under suspicion by the League leadership when Spud was able to gain access into the castle, suggesting a mole. Elite sought to distance himself from his old friend to protect his reputation with his fellow Justice Leaguers, as he was the one that convinced them to allow Pi into Haven.

Tempers flared as the rhetoric between Elite and Pi continued to climb, with both insulting each other in the community Forum. Several days later on 3E:102, Elite ambushed and killed Pi, marking the final end of their friendship.

The Justice League immediately denounced Elite's actions, calling the murder unsanctioned and assuring Pi and the other residents of Haven that their safety was assured. Rather ironically considering their history, Panda moved into the quaint village and became Pi's roommate. The two remained close friends, united by their dislike of Elite.

Though he only made rare visits to Dragonhollow after the Third Era, his zany nature was not soon forgotten and from time to time older veterans still spoke fondly of him.

Pi was last seen in Dragonhollow on 6E:87.

Pi awaiting his chance at the Colosseum 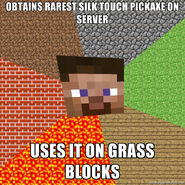 Azureila referencing Pi's use of the Spawner Pickaxe

Advocating Kimarastraz as a Priestess of Eris

Pi caught talking to himself
Community content is available under CC-BY-SA unless otherwise noted.
Advertisement