Hammerlea Public Library was a center of knowledge and learning in Hammerlea during Dragonhollow's Seventh Era.

It was built by Jinx, an Architect of Eris, in her role as a member of the Hegemon Retro's build team for Hammerlea.

As part of the city's navigation system, the library was lit by a blue beacon that could be seen from anywhere in Hammerlea.

Situated on the northern edge of the city's plaza, visitors ascended a wide sandstone staircase with 32 steps to reach an endstone landing upon which the main building rested.

The stone brick and cobble library was defined by its thick vertical marble columns starkly visible in both the exterior and interior. Intricate sculpted carvings set into the facade, some inlaid with sea lanterns, brought greater definition to the stonework.

Upon entering the library via double arches made from chiseled marble, visitors were greeted with a warm, softly-lit open interior with tall bookcase stacks and a carpeted section with a reading table. A help desk manned by two librarians provided access to reference guides that could be purchase for a single gold nugget.

Residents were invited to sell their own written books at the library.

An entrance to the underground Hammerlea Catacombs was concealed behind the library bookcases, accessible from a door triggered by a button disguised as an architectural flourish.

Jinx's pet parrot Sir Simon was often seen perched on the reading table until his tragic disappearance on 7E:68.

The Hammerlea Public Library opened to the public on 7E:1 and partially collapsed on 7E:120 due to the extraordinary gravitational forces exerted by the arrival of Nyx, the dreaded “Eternal Night”. The damage revealed a previously unknown complex of ruins located beneath the library and the catacombs, including what appeared to be an ancient library whose contents were to forever remain a mystery.

The following books could be bought and sold for one gold nugget by interacting with the librarians.

During the construction of Hammerlea

Across the plaza, behind the fountain

Looking upon the “Dragon Stairs”

Chairty on the upper landing of the “Dragon Stairs”

Hidden door to the Hammerlea Catacombs

Chairty buys books from the librarian 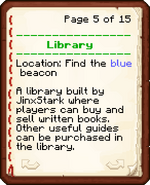 As seen in the Hammerlea Guide
Community content is available under CC-BY-SA unless otherwise noted.
Advertisement