Greywatch was a military order active on both Dragonhollow and Halfast during the Fifth, Sixth, and Eighth Eras.

Greywatch was founded by 1st Lord Commander Lex on 5E:103 as a protective haven for Pandora residents regardless of their Dragon Clan affiliation. They adhered to a philosophy of legalism, defending the Edicts of Eris and targeting those who violated them.

Their high-walled oceanside fortress, Fort Greywatch, protected inhabitants from outside threats and gave rise to a small village in its shadow.

Despite their offer of sanctuary and their inclusive policies, Lord Commander Lex recognized that Dragonhollow was often a dangerous place and was fully prepared to defend their territory when necessary. First Ranger Evan was an experienced warrior who often patrolled the castle grounds.

As their numbers grew, Greywatch expanded by building Greywatch Road from the fort to Rider's Rest, where they opened an embassy and maintained strong relations with the Dragon Riders.

While they initially were a peaceful faction, Greywatch became embroiled in conflict with the Dragonslayers after their embassy in Rider's Rest was destroyed. On 5E:115, they declared war on DS and joined the Third Dragonslayer War. After griefing Greywatch Road, DS descended upon the fort and assaulted it with streams of cascading lava on 5E:121.

In the aftermath, the faction constructed a new castle in Outer Pandora dubbed Greywatch II within the community of Norwich. The old fortress came into the hands of a new caretaker, Sleekit.

Though Norwich fell into ruin following numerous attacks by the Dragonslayers, Greywatch II was one of the few structures to remain standing. Lex officially declared Greywatch inactive on 4E:307.

However, two days later she solicited opinions from the community on whether or not she should revive Greywatch in the coming Sixth Era. The vote passed 9-3 and Lex accepted her new destiny.

As promised, Lex reestablished Greywatch in Hallowmere, beginning construction of a mountain castle overlooking Hardship and offering strategic control of the Straits of Mere. She began a recruiting drive on 6E:14 in search of fresh faces. Newcomers ManDooga and Timafta enlisted with Terry joining up as an associate.

Their influence continued to grow with the construction of supporting crop fields operated by newly appointed farmkeeper ManDooga, docks on the River Lethe, and a railroad line from Hardship to their stronghold.

The faction was targeted by the Merry Men during their Invasion of Hallowmere. Lex killed Waffles several times after he claimed he was practicing black magic, a violation of the sacred laws passed down by Eris. In retaliation, on 6E:52 his brother Jrod—leader of the Merry Man vanguard—infiltrated Greywatch Garrison, laid in ambush, and killed her. Greywatch then announced a standing bounty on the head of Jrod, payable in gold, emeralds, and future favors from the faction. Following the attack, Lex chose to consolidate Greywatch's front by abandoning the docks and farms, focusing their manpower on the castle itself.

Though Lex did not know Retro well, Greywatch recognized him as the lawful representative of Eris and supported him during the rebellion against his rule.

Lex eventually answered HyperSilence's call to join her fellow Hollowers in building a new home on Halfast during the Eighth Era, reestablishing Greywatch as a regional power in doing so. Their hard journey across the stars was chronicled in the GSS Invictus Log.

From their headquarters at Castle Skywatch, Greywatch slowly began expanding their influence in the area through ventures that supported the community such as public bridges, a road network, and a spawner that all could access. Over time this nexus of activity coalesced into the castle town of Greywatch Hold.

The organization published Codex A Gray Vigilate and its appendices Amendments I & Amendments II which served as a guide to initiates regarding their principles of conduct.

Not willing to forgive old injustices, Greywatch immediately announced a bounty on the head of their old foe Jrod, paying out ten diamond blocks and future favors from the faction.

On 8E:233 the faction came under attack for several days by Wiz and its Lord Commander Lex became the first enemy head to be mounted in the Scylfings' Hall of Shame in Myrkviðr, leading her to greatly improve the local defenses surrounding Castle Skywatch. Greywatch eventually reached an non-aggression pact with the Scylfings after Wiz carried out a personal favor for Lex.

Sensing an opportunity for what she considered to be leveling the playing field for Halfast Survivor, Lex worked alongside Seudo to lure current frontrunner Alec into an ambush on 8E:273. Alec, feeling backstabbed, retaliated by partnering with Jrod and slaying Paladin Getz, an act for which the Lord Commander named him an enemy of Greywatch.

After the Initiate Acid_King confessed to HyperSilence that he'd used forbidden sorcery to harvest resources, Lex named him an oathbreaker and expelled him from the organization.

Greywatch continued to battle against Jrod and Alec in the area surrounding the Fish Bowl, including a spectacular winged war in the skies.

FlyingPokemon, sworn sword to the faction, fled to his Greywatch Embassy after being hunted by Wiz. In turn, Wiz called on Lex to honor her debt and expel Poke from the embassy, but she refused on diplomatic grounds and argued that the favor she owed was hardly worth a declaration of war against Poke's Morningthaw. Wiz promised that Greywatch would come to regret the decision but was later defeated in single combat by Lex.

Seeing Greywatch solidify its position through political alliances with Seudo and Morningthaw, Jrod and Alec formed Eternal Chaos and the state of belligerence between the two rival organizations greatly intensified into an open state of war as both faced off against each other on opposite shores of the River Roaring.

The faction named Retro a heretic for various blasphemies—including but not limited to the re-publishing of 8 Shades of Acey—and announced a bounty for being him to justice. So reviled were Retro's transgressions that Greywatch paid out the reward to their enemy Alec when he came to collect the bounty. In response, Retro created the satirical Salmonwatch.

On 8E:304 Jrod infiltrated Castle Skywatch through doors mysteriously left open and went on a massacre, racking up 18 kills with the Bountiful Axe. With the help of Poke, Lord Commander Lex managed to corner the intruder in the bastion's storage warehouse and together they handed him only his second defeat in combat on Halfast, allowing Greywatch to claim the Bountiful Axe and other gear as their spoils of war.

To honor their patron saint Eris, the goddess of discord, on 8E:448 Greywatch unveiled an altar of worship for her inside their church in Greywatch Hold.

This is a list of all known members of Greywatch past and present.

Former site of the Greywatch embassy in Rider's Rest

Lex responds to Calp0l and the Dragonslayers

DHMC embassy with Fort Greywatch in the background

DHMC embassy from atop Fort Greywatch's 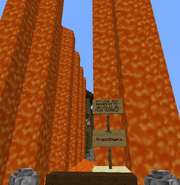 View of Fort Greywatch from the sea

Norwich, with Greywatch II in the background

Lex on battlements with Hardship visible

The following is out-of-universe information about the real world Dragonhollow.

Greywatch was loosely based on the Night's Watch from the television show Game of Thrones and book series A Song of Ice and Fire. Greywatch was also influenced by Warhammer 40k with the Codex A Gray Vigilate drawing inspiration from the Codex Astartes and the armour and weapons used by Greywatch being named after Space Marine wargear.

Community content is available under CC-BY-SA unless otherwise noted.
Advertisement