Eastbrook's central fixture was the oval clay track where riders could try out their pigs, donkeys, mules, and horses. It surrounded a grassy infield lined with hedges, where top finishers would climb to the victory podium. The track was noticeably smaller than its predecessor, the Lakeview Horse Track.

Suspended above the track was a massive rendition of the raceway's logo.

The grandstand could comfortably seat twenty and included an automatic fireworks launcher, the controls to the starting gate, and a vendor that sold fireworks.

The Eastbrook stables allowed citizens to acquire one of 16 stalls for their own personal use free-of-charge on a first come, first serve basis. Each stall was large enough to accomodate many horses and came with bales of hay and a chest.

Across the East Road lay a pigpen constructed by HyperSilence. Pigs were available for rental and riders could also purchase carrots-on-a-stick from a vendor.

A clubhouse stood next to the expansive courtyard entrance, where visitors could view race prizes, see past winners, and purchase equestrian items such as leads, saddles, and horse spawn eggs.

A large cross-country track surrounded the facility. Endurance Race riders had to visit each Race Official and collect an item—whoever collected them all and returned first would be declared the winner.

Eastbrook could be reached from Summergate either via the East Road or through the Summerlands Railway, which had a station at the racetrack.

In the Seventh Era, Eastbrook Raceway was located on the River Lethe at the northeast corner of Hammerlea. It was directly accessible from the North Line of the Hammerlands Railway as well as by pathway from the Ziggurat, which served as the city's center.

The main fixtures of the site remained the same—the stables, clubhouse, and track—but their locations were altered to fit the space available. A horse speedometer existed near the stables.

A pigpen built by Tox, loosely based on HyperSilence's design from the original Eastbrook, was positioned at the site's northern edge adjacent to Wojcik's farm. There, Pig Pen Paolo sold various pig race-related items.

No endurance track existed in the Hammerlands version of Eastbrook.

As part of Hammerlea's navigation system, a sea green beacon shone from the center of the Raceway's fountain. This fact went unmentioned in the Hammerlea Guide because it was written before the city opened to the public and thus long before Eastbrook even appeared.

Eastbrook was opened to the public on 4E:144.

The inaugural First Eastbrook Races were held by Acey on 4E:148 and consisted of a pig race, a donkey and mule race, and a horse race. Sprankles won the pig and donkey/mule race. Ferathmai won the horse race. Twenty-five people attended the First Races, the largest gathering of its kind during the entire Fourth Era.

As the track began to draw more visitors, many citizens began building projects in the surrounding area. Katie, Linuc, and Ky created large stables where horses could be stored. DredGrimoire, Tater, Greymac, and Dolphin built homes nearby. Tox claimed a large plot across from Eastbrook with the intention of building a shop selling race-day merchandise, but after it was clear that races were not going to be held regularly as initially planned by Acey, he sold the real estate to Ferathmai.

Eastbrook fell into disrepair during the absence of Eris and citizens began to report the failure of some of its functions, including access to their horse stables. These functions were fully restored when the Archpriest HyperSilence ascended to the Pantheon and began returning Dragonhollow to its former glory.

The Second Eastbrook Races were hosted by Hyper on 4E:391 and boasted two events: a pig race and a horse race. Sprankles defended his title by winning the pig race once again while Tox won the horse race.

On 7E:71, Eastbrook Raceway appeared in Hammerlea through the powers vested in the Hegemon Retro. He rebuilt redstone machinery for the starting gate while Tox and Jinx handled renovation efforts to prepare the racetrack for public use.

The Third Eastbrook Races were held on 7E:110. Ky won both the horse race and pig race, while Jinx emerged victorious in the foot race despite a conspiracy by Tox and Ky to cheat while wearing Flash Feet.

Eastbrook Raceway was destroyed on 7E:120 by the extreme gravitational forces exerted with the arrival of Nyx, the long foretold “Eternal Night”.

These are the top three recorded lap times in official races, separated by event type.

The following citizens were known to have rented a stable at Eastbrook.

Inside the clubhouse, manned by Raceway Ralph

The clubhouse and courtyard from Katie's stables

An empty stall in the stables

A stablehand chilling in the loft

Informational signs in the stables

View of Eastbrook from Dolphin's estate 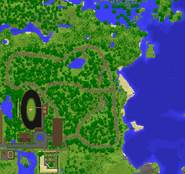 A map of the entire raceway complex

Dap in the stables

Retro and Wojcik explore the grounds

Prizes in the Seventh Era

Ky and Tox on the track

From the River Lethe