Carl, known as Dinnerbone later in life, was a racehorse owned by Trancesk8er during Dragonhollow's Fourth Era.

He was a brown colt with white spots and a blonde tail and forelock.

Dolphin chose to ride him under the name Dinnerbone in the Second Eastbrook Races and took an extremely close second place, just six hundredths of a second off of winner Sandinista. Strangely enough, the horse ran the race while upside down with no apparent effect on his performance.

Trancesk8er later bequeathed much of his belongings to Jinx, who also inherited his horses including Carl. He was one of the potential racehorses she planned to ride in the Third Eastbrook Races.

During the Fall of Summergate, he was blown to bits with dynamite placed by his then-owner, Jinx. 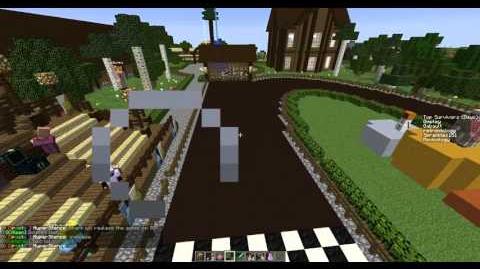 His pen in Trance Swamp

In the Eastbrook Raceway stables

Jumping upside down, kicking Dolphin in to the air

On a time trial

With Retro at the infield

The infield with Retro and Sprankles

Atop the infield hedgerows near Gabault

Dolphin plays with fireworks near Greyknight and Jinx

Awaiting the announcement with Tox, Retro, Jinx, and Sprankles

The infield with MrSharkberries and Jinx

On the victory podium at the Second Eastbrook Races
Community content is available under CC-BY-SA unless otherwise noted.
Advertisement